Kirin is one of Japan’s big three beverage companies, along with Suntory and Asahi (owner of the Nikka brand). All make beer and soft drinks and distribute them through their vast networks throughout Japan and the world but Kirin, unlike its rivals, is yet to export its whisky.

A tour of Kirin’s facility is a must for any whisky aficionado. You’ll need to take the Odakyu Line from Shinjuku Station in Tokyo to Gotemba Station, and then a bus or taxi ride.

The free tour starts off with an impressive film, detailing the history of Kirin Whisky, making much of its pure water in the foothills of Mount Fuji.

After viewing the industrial facilities, and taking a curious nosing test, visitors go the tasting room. The default drink is a highball, made with one of Japan’s better value whiskies, Fuji-Gotemba Sanroku 50. By the way, here’s a word to the wise… please do not pay silly prices for this online; you can find it in Japan for about 1,800 yen (USD18) just about everywhere (well, almost all liquor stores, supermarkets and konbinis).

You can also sample for a fee the flagship products, the Kirin 25 Small Batch Grain, awarded Best Japanese Grain Whisky 2016, and the 17 Small Batch Malt. 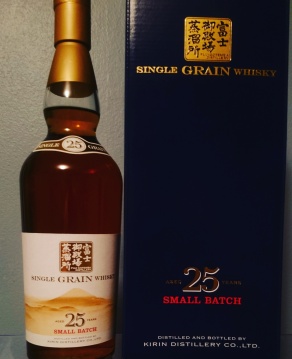